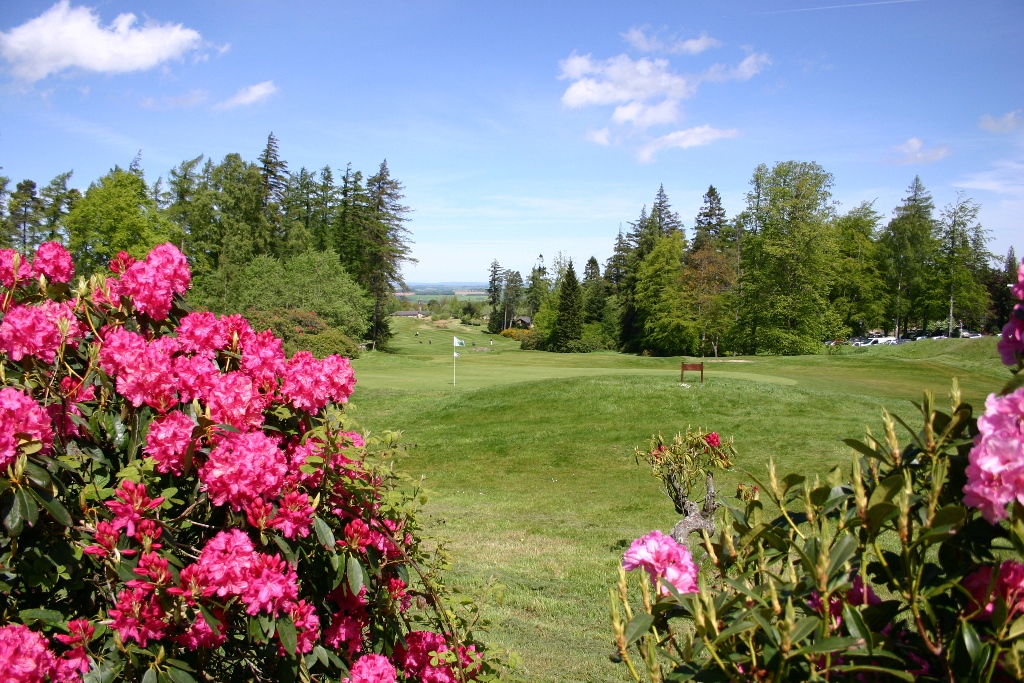 North East England borders Scotland, the “Home of Golf,” and it’s no surprise that many golfers pass through rather than tee up.

The heartland of Britain’s coal mining industry for two centuries, North East England has an undeserved reputation for being  as grim as working conditions once were “doon the pits”.

Not anymore. Regeneration has revitalised the North East.

Newcastle’s quayside has been transformed from a grimy dockyard into a funky urban landscape – lit up iconic bridges and cultural attractions such as The Sage Gateshead music venue.

Rockliffe Hall – £50m to build and one of Europe’s longest

In the past two years, Rockcliffe Hall’s hotel, spa and golf resort – near Darlington – and Close House Golf and Country Club in Northumberland, have both been talked about as being the elite of new British golf resorts.

This is a region beginning to register with the nation’s weekend breakers and holidaymakers and there’s no need for golfers to feel left out.

There have always been excellent golf courses in the North East.

The problem is they are scattered between Northumberland, Durham and the Hartlepool coast and it’s not easy to visit the leading courses unless you have hired a car or a group coach or mini-bus.

Rockcliffe Hall Hotel and golf resort opened in Hurworth near Darlington in 2009 and was built by Middlesbrough F.C owner Steve Gibson at a cost of £50m.

It is one of the longest courses in Europe at 7,879 yards and is set in 350 acres on the banks of the River Tees.

The hotel is five star and expensive at peak times.

Rockcliffe’s Sunday Driver package is one of the best around offering two rounds, dinner, bed and breakfast for £150 p.p based on two people sharing a room.

Rockcliffe is likely to be among the first places you’d stay for any North East golf break and it is certainly close to the quality courses in Durham and the Teeside area.

A 30-minute drive north of Rockcliffe Hall is the historic city of Durham.

It is world famous for its magnificent Norman Cathedral and vaunted collegiate University but it also boasts two un-missable golf courses at Brancepeth Castle and Ramside Hall.

Brancepeth Castle Golf Club is four-miles south west of Durham and is a traditional member’s club boasting a classic layout unrivalled in the North.

Shaped by the hands of Harry Colt and with a little help from Dr. Alistair Mackenzie – whose CV includes Augusta National in Georgia, U.S.A – Brancepeth is like an old MG convertible.

It’s impressive on the eye and has a timeless appeal similar to Sunningdale and Walton Heath in England’s southerly Home Counties.

Set in the rolling countryside of a former deer park, beneath the shadows of a 12th century castle and Church, Brancepeth boasts a series of short holes that are simply unforgettable.

Number 9: the most difficult ninth hole in the World?

The ninth hole, at 214-yards is the club’s signature, and attracted a rating from Golf World as the most difficult ninth hole in the world.

Teeing up in a chute of dense trees you fire over a ravine and stream to a green cradled in a bank beneath imposing Brancepeth Castle.

The par-three tenth at 210-yards is almost as difficult.

Like the 8th, 9th and 11th holes, you have to hit over a natural gorge to a well protected green with bunkers short and oblivion waiting to the left and behind the green.

Only right offers any real room for error.

Once you survive what locals refer to as their own “Amen Corner,” you’ll find the back nine mellows.

From the birdie-able par five 12th, it rolls gently back to an impressive finishing hole and a final impressive panorama of Brancepeth Castle and the quaint old Church.

The road home from Brancepeth takes you through Durham City centre and I  recommend a visit to the Dun Cow Inn on Old Elvet.

A 16th century alehouse, which ageing locals say has hardly changed, sells Castle Eden Ale – the regions finest bitter – and has a snug bar to restore faith in the great English pub.

On the road North out of Durham City you’ll pass Ramside Hall Hotel and Golf Club signposted A690 to Sunderland – a city by the sea and a former heartland of UK ship building and home of the National Glass Centre.

Among the youngest of Durham’s golf courses, Ramside is already established as one of its best.

The best golf is to be played over the first 18, named the “Princes” and the “Bishop’s” after the Warrior Bishops who ruled over the region for the Norman Kings post 1066.

Nervous golfers should reach for the hip-flask before hitting over water to its tiny kidney bean shaped green.

Ramside is an ambitious club and plans are underway for a further 9-holes, spa and leisure club to be developed making the resort a 36-hole complex.

The four star hotel itself is modern and comfortable and its Rib-Room restaurant serves the choicest beef steaks sourced from local North East farmers.

Next on your list should be the rugged coastal links at Seaton Carew Golf Club in Hartlepool.

A rapidly improving seaside town, Jackson’s landing at the Hartlepool’s Marina is an impressive development brimful of shopping and restaurants.

Historically, the town suffered from economic deprivation but it is regenerating itself steadily.

In recent times, Seaton Carew was the subject of global media attention when prison officer John Darwin faked his death by paddling out to sea in his canoe.

His wife pocketed the insurance payout and they planned a new life together in Panama.

He lived in a false wall in their seafront home but eventually handed himself into police after years of hiding.

The town is now humourously called “Seaton Canoe” by locals.

Seaton Carew Golf Club is absolutely worth the journey.

The North East’s finest Links and amongst the best in England, this club dates back to 1887 and has two course layouts, “The Old” and “The Brabazon.”

Situated in view of Teeside’s vast Petro-chemical plants, the views are wholly outdone by the quality of the course.

While the 7,000 yard Brabazon is more challenging than the Old, both layouts share 14-holes which wind between buckthorn and gorse bushes.

Seaton’s turf is crisp and sandy, and in a region with predominantly parkland courses, it makes for a refreshing change to battle the sea breezes and firm greens.

Like St Andrews Old course, Seaton’s best holes are its closing quartet, and none more-so than the 397-yard 17th – “Snag” – a formidable par-four that is terrifying from tee to tap-in.

The home hole, with out of bounds along the right and a snaking ridge of dunes and whin bushes left, is no push-over either.

A stay at Rockcliffe or Ramside means you can easily reach any of the courses we’ve mentioned but it’s a longer drive to the Hunting Course at De Vere Slaley Hall, one of the North’s true golfing giants.

Slaley Hall: The Augusta of the North

A drive into the scenic Northumberland countryside will see you arrive at a course bearing the ostentatious title of ‘Augusta of the North,’ which, until 2002, hosted the Great North Open on the European Tour.

Alleys of towering pine trees and water hazards provide most of the course’s backbone, especially at the Hunting’s signature par-four ninth hole.

At 453-yards, you have to find a fairway about as wide as a hospital corridor before clearing a burn and hitting a wood steeply uphill to a heavily bunkered green.

Both De Vere Slaley Hall courses are always well conditioned, have dramatic rural views and some of the finest greens you’ll play on.

On its own it’s a superb golfing destination and has both links, at Dunstanburgh, Bamburgh and Goswick – with views of coast and castles – and burly parkland courses like Matfen Hall, Linden Hall and Foxton Hall.

In 2011, a second course was opened at Close House Golf and Country Club, close to Newcastle, and owner Graham Wylie revealed ambitions to transform it into the North’s best golf resort and hotel.

His cause was helped when former world number one Lee Westwood signed a deal to represent the club as its attached Tour Professional.

Global Golfer has plans to visit Close House and review the new Colt Course but we’d like to hear from any readers who have played it?

In the meantime, head to Newcastle and its Gosforth suburb for a truly sublime if traditional experience of parkland golf.

The Northumberland Club, or the “Park” as it is known locally, is an exclusive private club which welcomes visitors.

It’s laid out around Newcastle’s racecourse and R&A Secretary Peter Dawson is listed among its most illustrious members.

You’ll find yourself driving over the racecourse at the 497-yard par-five third, and, while the Park’s fairways are generous, it’s the broom, bracken, heather and gorse lying in wait at the edges that make it a tough test.

The Northumberland club is close to the trendy suburbs of Gosforth and Jesmond, the latter being the place to be seen.

The regeneration of Newcastle has done much to raise the region’s profile, and with a number of low budget airlines operating out of Newcastle airport it has never been more accessible.

Ultra modern hotels like Rockcliffe Hall and Close House, a stunning array of golf courses and vibrant urban centres are finally banishing the myth that it’s all working men’s clubs and greyhound racing up North.

WHERE TO STAY AND PLAY

Hadrian’s Wall
Built by Emperor Hadrian in AD122, this 73 mile long wall was built as a form of border control in Roman Britain, isolating and controlling the “Barbarian” Tribes in modern day Scotland, among them Picts.

Today, the surviving masonry of the wall is one of greatest Roman monuments in Britain and a World Heritage Site.

WEATHER
North East England has a cool and mild climate in Summer, and Winters can be harsh. Temperature reach up to 28 degrees celsius at the height of Summer.

A WORLD OF GOLF

Welcome to Global Golfer Magazine – an independent home for people who love golf and the joy of travel.

Read inspiring travel stories and learn about golf played in all corners of the globe.